Enrique de Álava’s laboratory is working on the molecular diagnosis of Ewing Sarcoma, a very aggressive type of bone tumour that mainly affects children and adolescents, especially during puberty. It has a high ability to spread rapidly and represents 60% of bone tumours in children younger than 15. When the Ewing Sarcoma spreads, children’s survival rate is lower than 20%, and therapies have not improved in the past few years.

It has been observed that two types of alterations in patient chromosomes (losses or copies of the fragment) are associated with a worse prognosis. This project purports to validate the correlation between the prognosis and these chromosome alterations and establish a simpler methodology with an easier clinical application to predict patient prognosis. 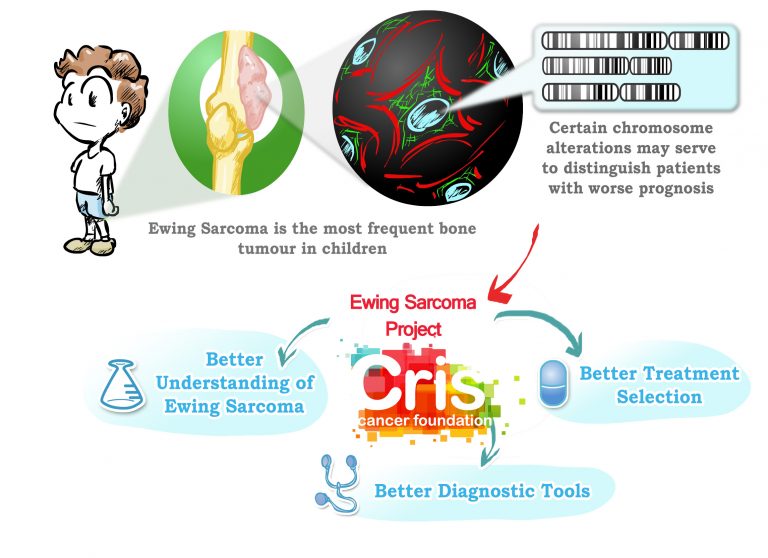 In 2018, the sample processing and analysis procedures were concluded. At this current time, at a European level, the latest studies are being conducted to certify that analyses of modifications of chromosomes can predict patient prognosis. That data indicate that the chromosome alterations described previously do indeed have the capacity to predict how the disease will develop.

Furthermore, the simplified methodology (FISH) is proving to be just as useful for knowing prognosis as the more complex method. This approach, therefore, could be a much cheaper and faster tool for the evaluation of prognosis, with a much easier application in clinical practice.

The results will be published over the course of this coming year, and since they are looking so promising, they might be extendible to other types of childhood cancer.

Throughout 2016 we have received a large quantity of samples from an Ewing Sarcoma European Trial, out of the 330 targeted for the study.

More than 200 analyses have been performed pursuant to the methodology described above to detect chromosome alterations, and therefore this part of the project is almost completed. Trials using simplified technology are also advancing at a good pace.

The trial will be completed next year. Once the trials using both methodologies are completed, a statistical analysis will be undertaken to see whether or not the hypothesis that the chromosome alterations described above have the ability to predict patient prognosis has been confirmed. Furthermore, if the simplified methodology is shown to be just as powerful, it will prove a faster and cheaper prognosis evaluation tool, easier to apply in clinical practice.