Haematological or blood cancer is a type of cancer that affects your blood cells. Over 40,000 people are diagnosed with a blood cancer each year in the UK, and over 250,000 people are currently living with blood cancer. Haematological malignancies are the types of cancer affecting blood, bone marrow and lymph nodes. They are referred to as leukaemia, lymphoma and myeloma depending on the type of cell affected. The three types of malignancies are connected through the immune system and, generally, a disease affecting one will also affect the others.

These tumours can be largely controlled, but in many cases relapse can be fairly unpredictable. As a result, survival rates are still around 50%. Research in this field is therefore absolutely essential.

Description of the Project

The CRIS Haematological Tumours Unit is a multidisciplinary service that combines clinical research (with patients) and laboratory research within the H12O Hospital Haematological Tumour Care Service. This service provides treatment to hospitalised patients, outpatient care, and is also conducting clinical trials. The operation of this unit allows research results to reach patients quickly through clinical trials to treat these tumours, which are still largely incurable today.

The HUNET-CRIS Unit has been accredited by the Community of Madrid for Phase I trials. Currently, 132 clinical trials are being conducted for various haematological diseases and cancers, mainly lymphoma, leukaemia and multiple myeloma. Since 2013, when it was opened, more than 660 patients have been treated in this unit, in over 250 clinical trials. The innovative treatments used have been shown to be safe, as the percentage of toxicities derived from them has been very low, and there have been no deaths as a result of treatments.

One of the key features of the HUNET-CRIS Unit is that it is always at the very forefront of research and treatments. Currently, state-of-the-art cell therapy treatments are being administered. These include natural killer (NK) cell therapies for myeloma and myeloid leukaemia. NK cells are cells in our body that normally detect and eliminate abnormal and tumour cells, and can be used as reinforcements in cancer patients. The Unit’s researchers are also pioneering the use of revolutionary CAR therapies (see illustration below) for various blood diseases, such as relapsed follicular lymphoma, diffuse B lymphoma, and multiple myeloma.

Significant developments since the start

One of the most pressing problems in chronic myeloid leukaemia is the monitoring and rapid detection of tumour cell recurrence. The sooner they are detected, the sooner action can be taken and the more effective it is. Minimal residual disease (MRE) is a term that refers to tumour cells that remain after treatment. Any variation in this number may indicate that the tumour is progressing again, meaning that a relapse is occurring. That is why it is essential to have methods to measure MRE accurately and reliably. In this context, the group published an article in the journal Haematologica describing an extremely sensitive new method of detection for minimal residual disease using patients’ blood samples.

Another major step taken by the HUNET-CRIS Unit was the development of the first treatments based on combinations of four drugs that, for the first time, are pursuing a curative goal, since until now most treatments were aimed at the chronification of the disease.

In addition, the HUNET-CRIS Unit was one of the first centres in Spain to participate in international clinical trials in which lymphoma or myeloma was battled using CAR-T-based treatments.

One of the main objectives pursued by the Unit is to improve current cell therapies. Among other avenues of research, it is focusing on Natural Killer cells, which have become increasingly prominent in cancer treatment over the last few years, as an alternative to CAR-T. CAR-T cells are T lymphocytes, the elite cells in our body specialised in destroying dangerous cells, to which a molecule has been added that acts as a radar. This molecule guides the T lymphocyte to attack tumour cells. Treatments with these cells involve extracting lymphocytes from the patient, adding the detector by means of genetic engineering, and then administering them to the patient. These therapies have revolutionised the treatment of blood diseases. However, in some cases they produce hyperinflammatory and/or neurotoxic reactions that can be very dangerous for the patient. In addition, CAR-T cells from a given donor can attack the healthy tissues of the patient receiving the therapy, so treatment can only be done using cells from patients themselves, which might not always bei in optimal condition and also need to undergo a very expensive customised production process.

By comparison, Natural Killer cells are much safer and do not cause any of these possible side effects. This makes them an interesting alternative, but there are, nonetheless, a number of problems with this approach: without manipulation, they are not as effective as CAR-T lymphocytes; tumours can also adapt to them, and when they are introduced into the patient they do not usually last long in the blood stream. To address these problems and turn Natural Killer cells into solid therapies, CRIS Unit laboratories have developed an ambitious research strategy. 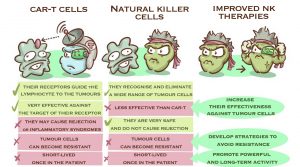 To enhance their effectiveness, work is being carried out to develop therapies with modified NK cells that incorporate an additional receptor, i.e. CAR-NK cells. The receptors/radars added to them include NKG2D (which recognises altered, infected, and tumour cells) and a receptor that identifies BCMA (a molecule that frequently appears in myeloma cells). These models are working very well in vitro against leukaemia and myeloma cells, and the results are likely to be published over the course of the year.

To combat tumour cell resistance, they have established a novel strategy. As myeloma advances and the immune system tries to fight it, a molecule (HLAE) in the tumour cells starts to appear that switches off the activity of Natural Killer cells.  This means that tumour cells are free to grow without worrying about NK cells. However, the laboratory has been able to verify that if its natural NKG2A receptor is blocked by neutralising antibodies, NK CAR cells can be re-activated. This finding could be tremendously important, allowing NK cell therapies to work better and stopping tumour cells from adapting.

To increase the duration of NK cells in the patient, the CRIS team has developed a proprietary method to boost the power of NK cells: they last much longer, and unlike normal NK cells, they are much more efficient the second time they face the same threat. As a result of this latter feature, this type of NK cells are also known as receptor induced memory-like NK cells, and can be key in the fight against relapses.

Finally, another problem with any cell therapy that uses CAR T lymphocytes is the cost and effort it requires. They have to be produced from the cells of each patient (to avoid rejection), and that makes the whole procedure much more expensive. Ideally, there would be a whole repertoire of cell therapies appropriate for any patient, which would be efficient and not cause rejection. Currently, the team is developing a therapy with a cell line of NK cells, in which CARs such as NKG2D and BCMA (mentioned previously) can be introduced, which are low cost and valid for any patient.

In any case, once a therapy is developed, before it reaches the patients, it must be tested in animal models. It is important to have models that reproduce human disease as faithfully as possible, so that the treatments tested give results that can be extrapolated to reality. Until recently, however, there were no good models for multiple myeloma that would allow this disease to be studied correctly. To solve this, the CRIS Unit is working on a predictive mouse model in which human multiple myeloma develops in the patient’s own immune environment. Because the researchers are dealing with the human disease, not the animal equivalent, this model is ideal for evaluating treatments that will one day reach patients.

But the CRIS Unit is not only working on cell therapies. Over the past few years, they have focused on cell energy centres, mitochondria. They observed that as the myeloma advances and progresses, the number, size, and activity of the mitochondria increase. This makes mitochondria a potential therapeutic target, as there are drugs, such as tigecycline, which can be targeted against them. For the moment, they have shown that this is so in cell models, and that in combination with one of the standard therapies, bortezomib, attacking mitochondria can be very effective in slowing the progression of myeloma.