Breast cancer is the most frequent type of cancer in women. It is estimated that one in 10 women may suffer from it sometime during their life. Although a large majority of breast cancer tumours are cured, even today 20% of patients are not. Resistance to treatment or the absence of specific therapies against certain types of breast cancer explains why certain tumours cannot be completely eliminated. 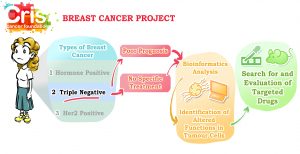 Triple -Negative Breast Tumours: Triple -negative breast cancer receives this name because the tumour cells lack certain molecules that define other types of breast cancer. These tumours have a very poor prognosis, and there is currently no specific therapy against them. Research in this field is therefore urgently required to develop effective therapies against these types of tumours.

Her2+ Breast Tumours: Her2+ breast cancers are very aggressive tumours, with cells presenting a large amount of the protein called Her2, which is the main reason for their transformation. Although there is a treatment against this type of tumours, a large number of patients develop a resistance to the treatments. This project is focused on finding out the mechanisms whereby the tumour cells avoid the treatment.

Achievements in the past year:

In Triple -Negative Breast Tumours: The project has begun to be implemented during the past year. Using bioinformatics tools, a large number of triple-negative tumours have been analysed, identifying a series of cellular functions specifically altered in these types of tumours. A panel of compounds specifically intervening on these functions of tumour cells is currently being tested, and could result in the development of new drugs in the future. Once it is established which compounds are the most effective, trials will be undertaken in animal models to continue assessing the effectiveness of possible treatments. As a result of this research, in January 2017 an article was published in the publication Oncotarget.

Her2+ Press Tumours: During the year, cell and animal cultures resistant to current treatments have been established. To date, results in cellular lines have allowed identifying interesting genetic programs and gene alterations in tumour cells that could explain resistance to currently drugs.  Read more