The Gabi Clinical Trial aims to find a novel therapeutic alternative for children who suffer from solid or haematological tumours and are in relapse, or have no other treatment alternatives.

This treatment seeks to provide the patient with reinforcements to its immune system, enhanced with state-of-the-art techniques, so that the patient may reject the tumour and prevent future recidivation. This clinical trial makes use of CAR technology which is obtaining extraordinary results and is fast becoming one of the most up-and-coming therapeutic orientations.

There are two basic concepts to keep in mind to understand the Gabi Trial:

Our body has an efficient army specialised in rejecting tumours. There are several kinds of cells that cooperate to defend us against cancer. To summarise, we will speak mainly of two of them:

Natural Killer Cells, or NK cells: These are the first line of defence against cancer.

T-cells, T lymphocytes: These are the elite cells of the immune system.

The word CAR stands for Chimeric Antigen Receptor. Essentially, it consists of adding to the immune system cells a detector designed using genetic engineering, which identifies and attaches to a molecule which we know is on the surface of the tumour that we wish to destroy.

One of the greatest successes achieved with this technology has been in several types of leukaemia and myeloma. In the surface of these tumour cells, there is usually a molecule called CD19. By adding this receptor to T-lymphocytes, we make them target and destroy tumour cells with incredible efficiency.

CELLS IN CERTAIN TUMOURS HAVE VERY SPECIFIC MOLECULES ON THE SURFACE. FOR EXAMPLE, CD19 OR BCMA. WE CAN ADD DETECTORS, CALLED CAR, TO THE T-LYMPHOCYTES AND MAKE THEM MORE EFFICIENT IN DETECTING AND DESTROYING THESE TUMOUR CELLS

Gabi will attempt to unify the best of NK cells and memory T-lymphocytes using CAR technology:

Memory T cells will be extracted from a donor, and a special CAR will be performed to add the NKG2D detector typical of NK cells to memory T-lymphocytes. This way, we will have memory T cells that:

NK CELLS ARE CAPABLE OF RECOGNISING AND DESTROYING A GREAT RANGE OF TUMOUR CELLS T-LYMPHOCYTES ARE ELITE TROOPS, BUT EACH OF THEM ONLY RECOGNISES ONE KIND OF ENEMY BY ADDING NKG2D TO T-LYMPHOCYTES, WE GIVE THEM THE ABILITY TO ATTACK MANY MORE TUMOUR CELLS

Essentially, the idea is to make NK-T-cell fusion cells, taking the best of each. The introduction of these cells will mean adding reinforcements, which will remain inside the body for a long time, and which will be very effective against tumours and able to recognise a great range of tumour cells.

The design will feature three branches:

10 patients will be recruited for each branch.

The genetic engineering steps to introduce the NKG2D detector in the memory T cells must be performed in absolutely sterile conditions, minimising manipulation. To achieve this, they will use the instrument Prodigy (Miltenyi Biotec, see chart), which automates processes, making them completely sterile. The cost of the instrument is 200.000€.

Due to the cost of the special and specific reagents of the Prodigy instrument, the estimated cost of each treatment will range between € 10,000 and € 15,000 per patient. 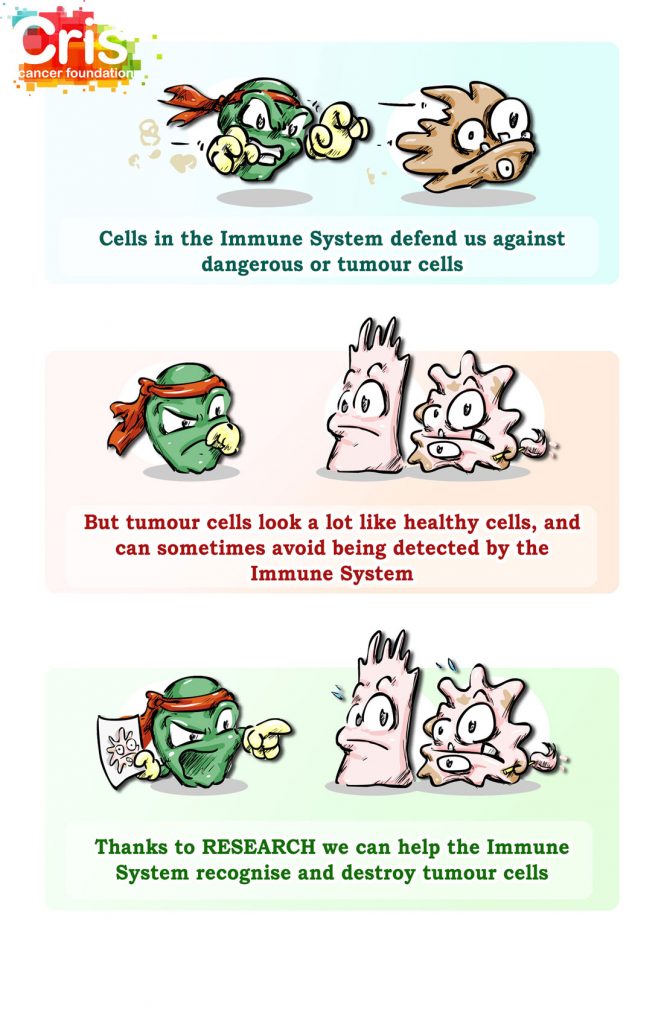